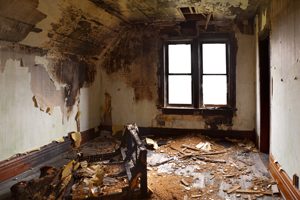 Fire damage can continue to have its effect on you and your home long after the flames have been put out. Smoke and soot residue left over after a fire may seem like something you can clean yourself, but before you try to tackle any DIY fire damage restoration, you should be aware of the dangers of smoke and soot.

Leftover smoke and soot are more than just dirty and smelly – they are very dangerous. Exposure to smoke and soot can cause some major adverse health reactions, especially if that exposure is prolonged throughout a DIY restoration process. In fact, soot is so dangerous that exposure to it leads to the first ever occupation of health legislation. In the 18th century, British Parliament installed the Chimney Sweepers Act in response to all the adverse reactions that are associated with smoke and soot, including cancer. So, what is it about smoke and soot that makes it so dangerous?

Not all materials burn the same in a fire. Materials that do not burn clean result in waste products, whether solids, liquids, or gases, that contain chemicals and toxins. Exposure to these contaminants is very harmful to your health. Items like plastic, fabric, carpet, wood, wool, and the drywall and insulation in the walls hold a lot of different chemicals that are released when combustion occurs during a fire. Smoke and soot are the leftover bi-products of those materials, which make them hazardous. The most common toxins found in smoke and soot following a fire include:

Following a fire, and before the restoration process, you can be exposed to smoke and soot through direct contact and inhalation. Airborne soot particles are microscopic, so you may think the air is safe to breathe when really it is contaminated. Wiping down smoke and soot residue disrupts the particle, causing them to be inhaled also. Even exposure to your skin by trying to clean them up on your own can cause health symptoms. Some common side effects of smoke and soot exposure are:

In infants, the elder, and those with who are chronically ill, these side effects are even more serious. In fact, infants who have been exposed to smoke and soot chemicals and residue could have lifelong consequences and risk complications with their developing respiratory symptoms.

Adequate personal protective equipment, and proper cleaning methods are required to safely cleanup soot and smoke from fire damage. To ensure that you, and your family, are not exposed to the harm caused by smoke and soot residues, fire damage cleanup and restoration should not be attempted on your own. Kelley Construction has had decades of experience reversing the damage caused by fire and smoke in homes in Bloomington. We can help reverse the damage caused by fire and leave your home as good as new all while keeping you and your family safe.